WARNING: This is an actual sermon (though I may rant a bit at the end). Please do not read/comment on this post if spiritual stuff offends you. It really wasn’t written for you. Thanks.

I have a confession to make. I stopped being a Christian a long time ago.

But please allow me to explain what I mean before you jump to any conclusions.

I chose to make my faith a serious matter when I was growing up. I knew there HAD to be a god – somewhere – because the complexity of the universe is just too great.  Now, add the moments of sincere spirituality I had experienced that convinced me beyond a shadow of a doubt that god – check that, God – existed. And even cared about me.

After investigating various faiths, I made my choice. And thus, I became a Christian. A believer in Jesus. I served in church, led Bible studies, and told people how much Jesus loved them.

Fast forward many, many years later.

I had a nice job with a big company. I was in a global role doing global things. I did my best to help that company make money. I traveled all over the world, coming home on weekends exhausted and jetlagged beyond comprehension. When I wasn’t too tired, I would attend church on the weekend with my family and fulfill my duties as a Christian.

And my faith slowly died.

All of it. Every last ounce.

There was literally nothing left but the intellectual acknowledgement that God existed. But I wasn’t so sure that Jesus was everything I had been told. I knew and worked with many folks who were Jewish, Hindu, Muslim, Buddhist, etc. and found many of them delightful. I also worked with Christians and found quite a few who were less than delightful. Downright hypocritical. They lived one way on Sunday and another way on Monday.

And I had become one of them.

Pause: Have you noticed this as well? That so many people who call

themselves Christian live one way on Sunday and another way on Monday? It’s a worldwide epidemic. I hope it hasn’t pulled you in. I hope this two-way lifestyle doesn’t describe you. Because it’s doing more damage than you realize.

You see, I had never really been taught the full message of Jesus. I got the “believe-and-go-to-heaven” part. And I even got the “love-others/love-your-enemies” part. But I didn’t get the “live-an-abundant-life” part. I had made being a Christian all about believing in Jesus. All while I worked in my global job and kept my weekends and family time set aside for the “Christian” bits.

And that’s not what the Bible teaches.

Oh, sure, believing that Jesus is who he said he was is a crucial part of being a Christian. Shucks, if you’re not going to believe that, don’t call yourself a Christian.

But the belief part is only the very beginning of a MUCH bigger journey. A journey of real discipleship. Of real transformation. Of an abundant, genuinely spirit-led life.

That’s where I had gotten it wrong. I thought that being “led by the Spirit” was about avoiding all those “sinful” things that the Bible is pretty specific about. You know – don’t be hateful, don’t be arrogant, don’t be unfaithful, and so on. So I thought that as long as I didn’t behave that way and believed in Jesus, I was being a Christian.

Man, did I have that wrong.

The Bible isn’t really about teaching you to avoid sins. To be more specific, the Bible teaches that if you put all of your efforts into avoiding sins, you are just another Pharisee. Or what C.S. Lewis calls “diabolical.”

“For there are two things inside me, competing with the human self which I must try to become. They are the Animal self, and the Diabolical self. The Diabolical self is the worse of the two. That is why a cold, self-righteous prig who goes regularly to church may be far nearer to hell than a prostitute.”

What the Bible really says is that I can’t avoid being sinful on my own. In fact, trying to do it on my own is the very problem. The more I use my own, human-generated strength to fight my weaknesses, the more that I am actually feeding my weaknesses. And destroying any chance I have at an abundant life.

When I understood that I had killed my own faith by trying to white-knuckle my way through work, family, church, etc., I suddenly realized that I wasn’t supposed to be a Christian. I was supposed to be a disciple. Someone who was committed to a new way of living. Not just someone who “believed in the right God.” That’s when I stopped being a Christian. And started being something much more.

My faith returned and my life has become abundant in a way that I never thought possible. I can honestly say that I am the same person on Sunday AND on Monday. That doesn’t mean that I am perfect. Not at all. But I finally understand what it means to live by grace. And there is no other way that I would want to live.

So why did I write this post? This is supposed to be a sales enablement/leadership blog, right?

Well, I’ve got two reasons for you.

First, I can’t have a blog that is “isolated” from my faith. I can’t separate myself into being a person of faith and being a professional businessperson/consultant/writer/dude. That would only contribute to being one person on Sunday and another person on Monday. That’s diabolical. So while I won’t turn this blog into a pulpit, I won’t hide my faith either. I want to be accountable for living the same way, every day, in work, play, home, family, etc. 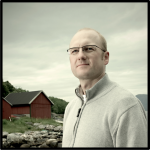 Second, if you’ve read this post all the way to this point without tuning out, I want to encourage you. Whether you call yourself a disciple of Jesus or not, there is a life that is bigger then your expectations. It’s bigger than your circumstances. It’s purpose-driven and Spirit-led. And IF you call yourself a disciple of Jesus, please BE one. Don’t live one way on Sunday and another way on Monday. Love God and love others. It shouldn’t matter if other people are devout, atheist, Muslim, Jewish, gay, straight, rich, poor, Liberal, Conservative, black, white, brown, or purple. Live by grace. Allow yourself – and others – to fail. Then display the kind of life that gets back up and keeps on going without fear, arrogance, or anger. Live the same way every day, in every relationship, in every moment. Be the person who brings love, joy, peace, patience, kindness, goodness, faithfulness, gentleness, and self-control to the party.

And when you do, let it be because you are empowered by a different Source, not because you are another self-righteous, self-propelled person who calls himself a Christian. That kind of lifestyle causes more damage than you know. To yourself and others.

I mua. Onward and upward.

Father, widower, leader, sales enablement pro at Workday. *These are my personal views and do not officially represent Workday. View more posts

12 thoughts on “WARNING: This is an actual sermon (I’m not kidding)”