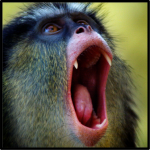 Have you ever seen a monkey get angry? It’s not a pretty sight.

I spend a fair bit of time in Africa each year. On one of my trips, I went on a safari. (Note: once you’ve seen animals in the wild, you’ll never want to visit a zoo again.) During that day, my group and I pulled into a rest area to eat lunch. Guess who was already waiting for us. Yep. Monkeys.

At first, you think they’re cute. Then you watch them for a while and you slowly realize that they are filthy little thieves/opportunistic punks. They have all figured out that when humans show up with a bag or box, there WILL be free food inside. I can’t actually blame them. I certainly would rather shoot for a free meal by dodging tourists than dodging predators. Besides, some dumb tourist will eventually hand the food over as a gesture of inter-species goodwill. Suckers.

And by suckers, I’m explicitly talking about the humans. Because once a human gives even the tiniest portion of food away, I’m convinced that a telepathic message is sent to the rest of the entire monkey colony saying, “We have a target. Take your positions.”

So I watched this whole thing play out, observing with the typical curiosity that we all have while watching a train wreck. A tourist “successfully” gave a monkey a bit of food. The monkey sat there, happily munching on the food while “patiently” waiting for more. What did the tourist do? Told his friends to come over and “bring the camera.” But as soon as the small group turned their attention to the nice monkey, a handful of other monkeys rushed in, grabbed their plastic grocery bag full of food and drinks, then tore back to the bush to split their new found booty. The tourists only caught on to the ruse at the last moment, chasing after the monkeys unsuccessfully, while the original monkey slipped away to enjoy the spoils with his mates.

But here is when the most interesting part happened.

So why did I tell you this story?

But expectations are only half of the formula. For a

If I took you into the African bush for an overnight adventure, you would have all kinds of expectations – with safety being your first priority. But as long as I gave you options to address your expectations, there probably wouldn’t be any problems (except for those of you who can’t stand camping of any kind, because you’ll complain about everything no matter what). But if I started taking away the options that meet your expectations, what I am calling your alternatives – like the fence around the camp, the armed guides, the electricity, and so on – your experience would go from exotic vacation to Jurassic Park nightmare.

The same thing happened to the monkey. His expectations of a free drink were increasingly stressful as he could not find an alternative to fulfill his expectations.

Which leads me to my second point. This story shows how people typically respond when complex problems create stress. Certainly, we are not monkeys, but we can sure act like them 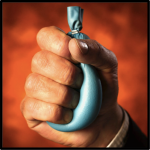 some times. When we become stressed by a significant problem, we can shut down (freeze) like the monkey did at first. We look at the problem, we look at our friends, we look out in space, we look back at the problem, and so on. While our brains sit frozen. And the pressure only increases. So we can become combative (fight). We lash out. At anyone. Or anything. We get angry, hoping our emotional energy will somehow create an alternative magically. Which doesn’t work. So we can withdraw (flight). We run away. We hope the problem will go away while our attention is put elsewhere. While we we ignore it completely. While we get as far away as possible.

This also makes me think of our customers. They are struggling with complex problems. They may not even be acutely aware that the problem exists (which makes your skills at uncovering expectations and alternatives EXTREMELY important), but they are surely feeling the effects of the problem. Because they are stressed out. They are frozen, fighting, or running away. Or a mix of all three options. And you can either be turned off by their reactions or you can recognize that the reactions are just that – the effects created by the existence of a complex problem – and put your efforts into addressing the root causes and being a problem-solver.

And effectively calm the monkeys down.

I mua. Onward and upward.

4 thoughts on “Have you ever seen a monkey get angry?”